The team was called out on the 20th of feb at 18:23hrs to Sliddens Moss for two lost walkers.
The two walkers had set off from Crowden earlier in the day to walk to Black Hill but became disoriented in the fading light and called for help.
Initially, the call came into our neighbours Glossop
Mountain Rescue Team who used Phonefind to determine the lost walkers location which put them in Woodheads area, the job was passed over to us but given the location, Glossop MRT deployed team members alongside Woodhead.
The first section deployed on what was a very windy night indeed and located the two lost walkers on open moorland in the middle of Sliddens Moss. A second party was deployed to intercept the casualty party on route to Black Hill summit.
At this point, one of the walkers was starting to struggle with a groin injury. It was decided the uninjured walker would be led off quickly to keep warm by a member of Glossop MRT and search dog Scout from Mountain Rescue Search Dogs England and his handler.
Meanwhile, after some painkillers, Jelly babies and a little encouragement, the 2nd walker was able to carry on with the long walk back to Holme Moss Summit carpark. A 3rd section was deployed to intercept with a stretcher incase it was needed but the young lady made good progress and safely arrived back at the RV, the job was compete by 21:46hrs. 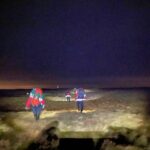 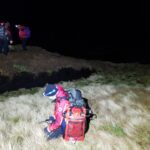 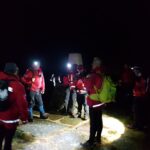 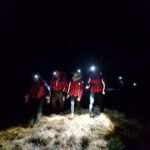