The team was called out on the 22nd May at 13:30hrs to assist Yorkshire Ambulance Service with an injured mountain biker in Grenoside Woods.
The casualty had taken a fall at speed and was experiencing lower back pain, as a precautionary measure, the casualty was immobilized including the use of a pelvic binder and transferred onto our stretcher using the YAS scoop to minimise movement, a short carry through the woods to the waiting ambulance meant the mountain biker was soon on his way to hospital for further treatment.
The team was also called out to an injured mountain biker in the Conisbrough area yesterday, as team members was enroute, YAS paramedics had managed to extricate the casualty to the road head and team members stood down. 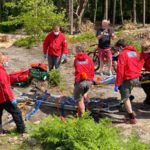 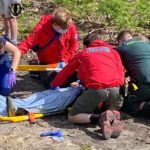 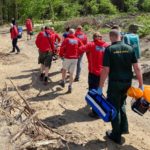 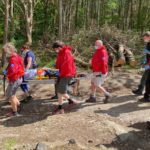