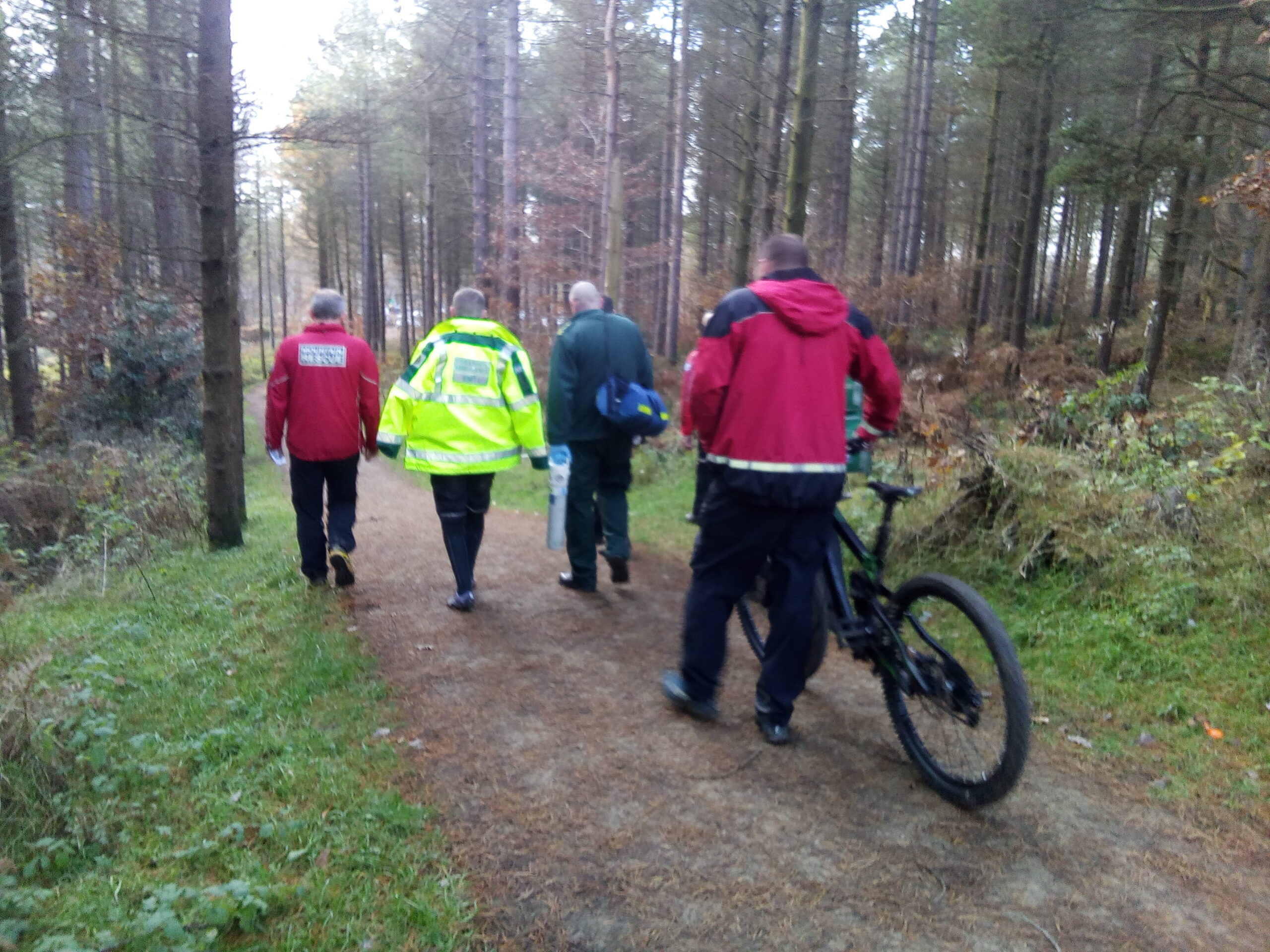 The team were called out at 1300 to provide assistance to YAS in the location, treatment and recovery of a mountain biker who had been injured in Greno Woods. The casualty had suffered a suspected broken shoulder and ribs. In order to attend the call-out a number of team members had to abandon a training exercise in order to attend. After treating the casualty and providing some pain relief, he was able to walk to the waiting ambulance with some assistance.[Edit] 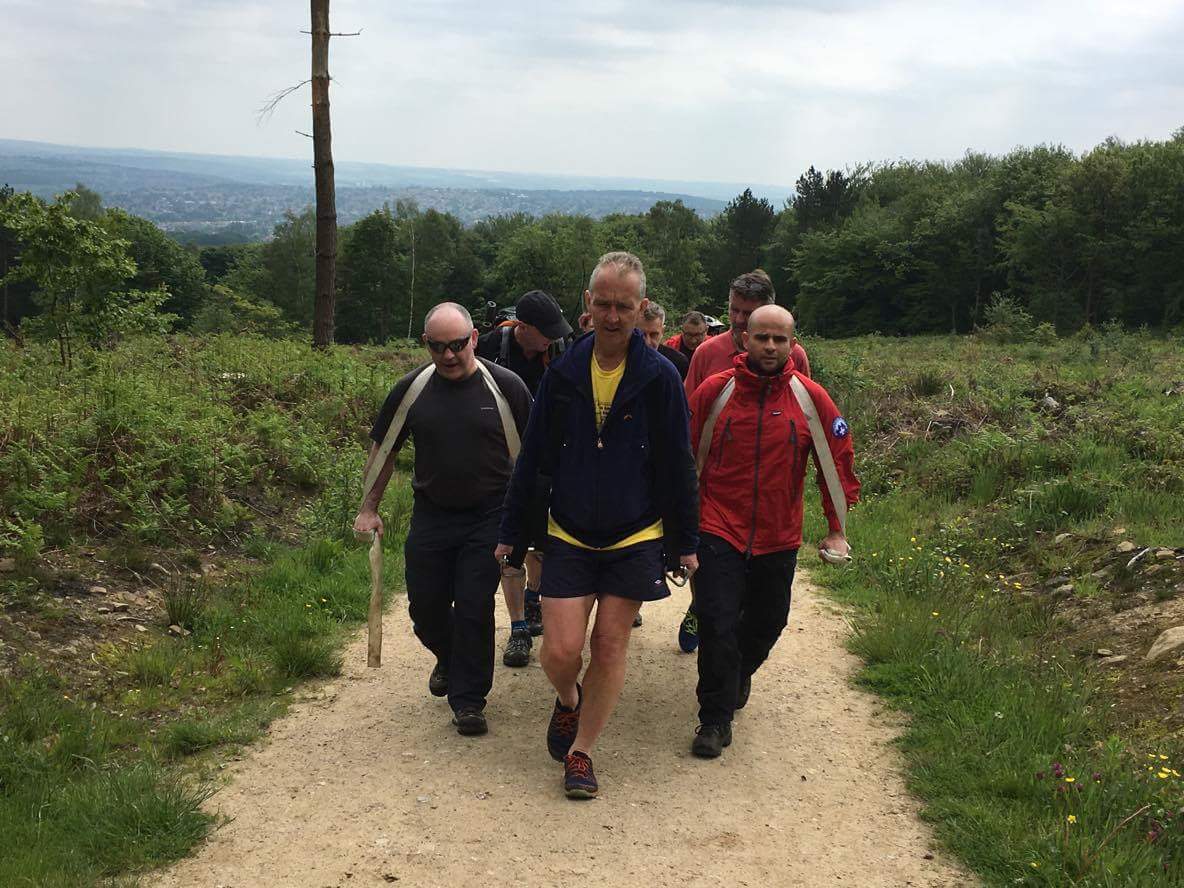 Shortly after receiving our first call-out of the day, we were again called by YAS to assist with another injured MTB rider, again in Greno Woods. The rider was treated by the YAS paramedics before being transferred by stretcher to the ambulance waiting at the roadside. Many thanks to Edale MRT who also provided assistance with this call-out.[Edit]

The team were called to assist YAS with a fallen MTB rider in Greno Woods. We were stood down en-route as the ambulance crew managed to walk the injured rider to the roadside ambulance.[Edit] 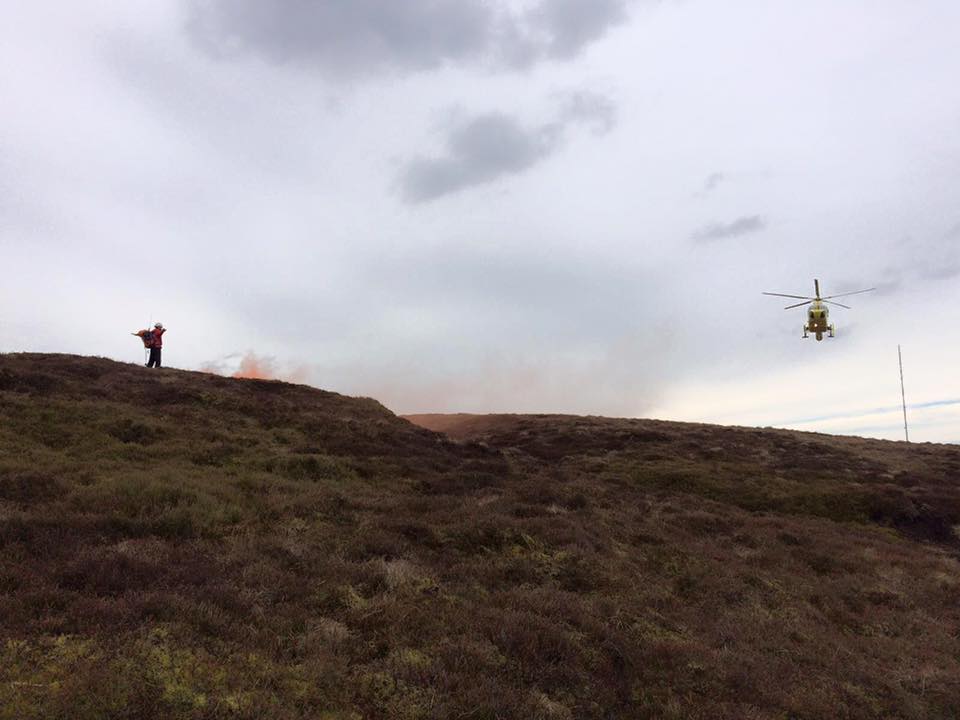 Today we were called to assist an injured walker with a suspected broken leg on Holme Moss. After treatment at the scene the casualty was loaded into a vac mat and then onto a stretcher. Due to the difficult terrain of steep groughs, peat bogs and the distance to the road additional support had been requested from neighbouring Holme Valley Mountain Rescue Team and Glossop Mountain Rescue Team to help with the stretcher carry. The Yorkshire Air Ambulance became available for this incident reducing the stretcher carry by transferring the casualty from the moor to the waiting road ambulance.[Edit]

We were called early in the morning to help South Yorkshire Police searching for a missing vulnerable person in the Greno Woods area of Sheffield. Regrettably, the search party found them deceased after a short search.[Edit]

After the search from the previous day had failed to locate the missing person, we were once more called to continue assisting with the missing person search. While we were out searching, the person was found safe and well elsewhere.[Edit]

The team were called to assist South Yorkshire police searching for a missing person in the Campsall area of Doncaster.[Edit]

After returning from this morning's earlier call-out, we were called to assist the helicopter evacuation of an injured mountain biker in Wharncliffe Woods. The casualty was a long way from the nearest roads, and there was no ambulance access, only 4-wheel drive vehicles could get down the track. The casualty was treated on the scene by the air ambulance paramedics and we helped to stabilize and immobilize him before transferring him to a stretcher and carrying him to the helicopter landed in a nearby field.[Edit]

We were called out just before 2:30 am to search for a mising walker in the Bleaklow area. Using the Black Clough car park as an RV point we then dispatched a number of sections up into the hills to search for the walker. At 5:30am he was found by a party from Glossop MRT who walked him off to Snake Summit.[Edit]

South Yorkshire police requested our help to find a despondent male who had gone missing nearer Maltby. Together with Edale Mrt , ALSAR search and rescue teams and Sarda search dogs, we searched wooded areas around where he was believed to be. However it later transpired that he was mobile and had moved away from our search teams, giving himself up to the police the following day.[Edit]

We were called by Yorkshire Ambulance Service to help recover a 75 yr old lady who had slipped on a muddy path near Bolsterstones injuring her lower leg. She was treated on scene and taken to the ambulance in our Land Rover .[Edit]

We were called by West Yorkshire police to help locate a vulnerable young female who was missing from home in holmebridge. We searched the area around her home but nothing was found. She was found a day later elsewhere by the police safe and well.[Edit]

We were called by the police to attend to a man who had fallen on a muddy path and injured his lower leg in woods near Sprotborough. The team treated the mans injuries on site and transported him to the ambulance waiting at the road head.[Edit]

We were called by Yorkshire Ambulance Service to attend to a 75 yr old lady who had sustained an ankle injury whilst out walking with friends in Langsett woods. The Team responded immediately, treated her on scene and helped her into the ambulance.[Edit]